Teachers Being Transferred for Political Reasons


Referring to a document leaked to PKR-linked NGO Solidariti Anak Muda Malaysia (SAMM), they said the move comes because these teachers are Pakatan backers or are married to Pakatan supporters. 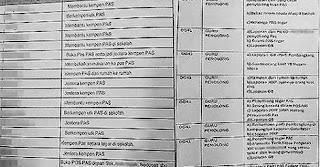 SAMM chief Badrul Hisham Shaharin, who submitted a memorandum on the matter to the Pakatan MPs today, said the NGO also has audio evidence that teachers are being penalised because of their links to political parties.

Badrul Hisham said a teacher had recorded her conversation with a district education officer appealing her transfer, but was told she would need to divorce her husband, a Pakatan backer, to avoid the transfer.

Guess what, the education official actually confirmed it.


Bachok deputy education officer Amran Mustapha, when contacted, confirmed that the list exists but said it "is not official".

Amran said it was an "old list", compiled by a district education officer who is no longer attached to the Bachok office.[...]

However, he could not give a reason why the district education office was keeping tabs on whether or not the teachers are Pakatan supporters.