Universiti Malaya (UM) breaks new ground in QS, has 5 Subjects in Top 50 in the World 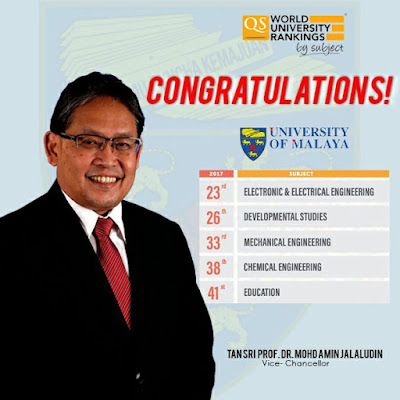 
This year’s QS World Universities Rankings – By Subject 2017, saw University of Malaya broke new ground by having five of its subjects being ranked as Top 50 in the world.

This rise has seen UM maintain a consistent graph of improvement, starting from one subject in 2015, rising to two in 2016 and to its current position this year.

Leading the field are Electrical & Electronic Engineering (23), and Development Studies (26). Whilst also in Top 50 last year, both subjects climbed further up the ladder this year.

In addition, the university also celebrates its accomplishment of 19 subjects in the world Top 100 this year, a marked jump from 9 subjects last year.

QS also ranked five broad subject areas, known as faculty. The record achievement of the three Engineering subjects above helped to propel University of Malaya’s Engineering & Technology faculty to Top 50 for the first time, now ranked 35 in the world.

The Arts and Humanities faculty crossed the Top 100, hitting the top 85 spot, while the Social Sciences and Management faculty maintained its position in the top 100 band.

Commenting on the latest achievements, University of Malaya’s Vice Chancellor, Tan Sri Professor Mohd Amin Jalaludin thanked all the UM staff for working very hard to improve its subject rankings. He believed that the quality of the staff, their commitment to their mission in research and teaching, as well as the discipline demonstrated in carrying out their tasks, have contributed significantly to UM’s outstanding performance.

Tan Sri Amin also attributed UM’s success to its Strategic Plans, implemented throughout the past decade to have hit the right notes. The Strategic Plans, now in its third phase that covers the period of 2016-2020, put great emphasis on transforming the research landscape of the university with a special focus on research culture.

The plan also calls for greater effort in internationalization, an important contributing factor to greater visibility of the university at international arena. It firmed up research cooperation with international partners, resulting in 40% international joint-authorship in total papers published. As a way forward, UM has now embarked on translational research, aims at utilizing research output for the needs of the society and nation.

Related to this, Tan Sri Amin revealed that the Strategic Plans also calls for the improvement in teaching and learning by emphasizing outstanding teaching and learning experiences through high quality academic programmes. Priority is given to the incorporation of the use of ICT in teaching & learning, the internationalization of the curriculum to ensure that UM graduates could be employed globally, and to have effective pedagogy in course delivery.

While elated with the results, Tan Sri Amin felt that UM is now facing enormous challenges in moving ahead, in the face of the financial uncertainties as a result of the economic downturn.

He emphasized that the present achievements, including in the QS Universities Rankings – by Subject, was a result of the investments and initiatives that have been made.

In order to forge ahead, UM will put emphasis on establishing smart partnership with industry with the hope to bring in the much needed fund for research and innovation, and to create a win-win situation through industry-academia collaboration. In this regard, Tan Sri Amin cited the Faculty of Engineering which had in the past two years, secured support from the industry, of more than RM230 million in kinds and equipment.

This, according to him, helped somewhat in making up for the lack of public fund. Tan Sri Amin believed that in order to make further inroad in the ranking tables, UM will need strong backing from both the Malaysian Government and the industry. He wished to thank the Ministry of Higher Education for all the support given to UM. He looked forward to continued support from the Ministry to improve UM’s standing in the top university league in the coming years.