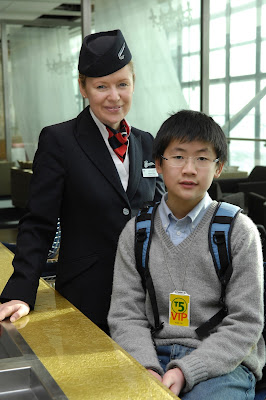 KUALA LUMPUR, 14 July 2016 – As hundreds of Malaysian students gear up for what may be their first semester abroad, many face the daunting challenge of excelling in their studies while also trying to settle in to a foreign environment. To put their minds at ease, British Airways shares some top tips, as advised by returning students, with those who are about to embark on their own journeys to the UK.

Vivian Tan-Loh, British Airways country manager for Malaysia, said, “The UK is home to many of the world’s leading schools and universities and has always been considered the most prestigious destination for Malaysian students. British Airways is proud to continue its long-standing tradition of supporting students from Malaysia in providing them with insights on what to expect when abroad and with many generous benefits that cater to their needs.”

British Airways operates a daily flight from Kuala Lumpur to London. Students who are studying in other UK cities such as Manchester, Leeds, Edinburgh and Glasgow can make easy connections at award-winning London Heathrow Terminal 5.

Additionally, students can also take advantage of British Airways’ Fly and Rail Package which enables them to go the extra mile with just one itinerary. Students can hop on the Heathrow Express from London Heathrow to the Paddington station, and from there to one of the First Great Western train stations, namely Bath, Bristol Parkway, Bristol Temple Meads, Cardiff, Exeter, Plymouth, Oxford, Par, Penzance, St Austell and Swansea.

British Airways' route network currently serves more than 200 destinations in 75 countries. British Airways currently operates one daily non-stop flight between Kuala Lumpur and London, it is also the only carrier to offer a four-class cabin configuration on the route.

In September 2015, World Traveller Plus, the premium economy cabin available on selected long-haul routes, was awarded the Best Premium Economy by Business Traveller Asia-Pacific. In October 2015, British Airways and its frequent flyer programme, Executive Club, was awarded the Best Short-Haul Airline and Best Frequent Flyer Programme by Business Traveller for the 10th consecutive year. The oneworld alliance, of which British Airways was a founding airline, came first in the Best Alliance category for the third year running.

In February 2016, British Airways was named the top Business and Consumer Superbrand at the Superbrands 2016 Awards, becoming the first brand to win both prestigious titles two years in a row.