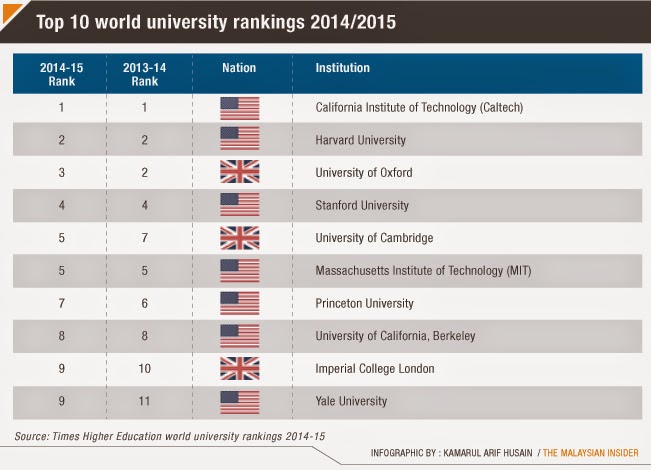 Two top Malaysian institutions, Universiti Malaya (UM) and Universiti Kebangsaan Malaysia (UKM), did not submit data for the annual World University Rankings 2014-2015, effectively missing out on the opportunity to be assessed against other universities in the world, says a global education index compiler. [...]

"This ranking (THE) has different indicators and it's more suitable for universities that have been established far longer.

"Indicators, such as 'industry income', are unfair to us as Malaysia's (industry income) is not as much as in the United States, for example. We cannot compete with them so it is best if we spend on rankings that are better suited to our direction and focus," she said, referring to the QS (Quacquarelli Symonds) rankings.

UM vice-chancellor Professor Datuk Dr Mohd Amin Jalaludin cited two reasons why the university did not participate in the THE rankings, which Malaysian universities have not been featured in since 2011.

"The first is because UM is still building up its publications and citations in the Web of Science database," Amin said in a statement to The Malaysian Insider.

"UM’s policy on this began only in 2008. It is now only beginning to bear fruit but is not yet sufficiently mature to make an impact."

The second reason, he said, was the amount of funding the university received, which was not enough to compete with other established universities around the world.

"UM is not yet in a strong enough financial position to compete with other richer, older and better-ranked universities. UM is making plans to be more financially independent but these financial plans are long term in nature."

Most probably the actual and real reason is the fact that annual QS World University Rankings for these two universities were already not that impressive so they of course do not want to participate in something that will make them even more unimpressive in terms of world university rankings. One is too much to handle already, huh?